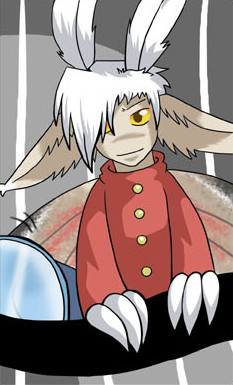 Fairies are one of the sentient races native to Medius, found mostly in the Southern Woods of Fragaria though can be found in other locations populated by the other races.

Fairies are tiny furry humanoids that resemble insects, commonly with the general appearance of butterflies, moths or bees. These traits are part of the fairy's natural defenses which allows them to blend in among the local fauna when seen from a distance; their appearance is an emulation of local insects in the area they were born.

For the most part they seem to be no different from the other races of Medius in that they have a diverse set of personalities; though they seem to be even more reclusive than even the Jakkai as they tend to avoid any contact with the outside races. This is due to most Medians seeing Fairies as a mythical race and end up selling them on the black market so naturally they would have little trust in the other races. Those who do open up to other races will only reveal themselves when needed.

So far, in the case of Duster, Fairies seem to age just as naturally as every other race. However it's unknown as to how long they can live up to; though with the Fairy Queen it's possible they can live for a very long period of time.

Fragarian Fairy Tales tell that the Fairy race is ruled by a powerful queen. The queen is said to hunt down and kill Medians who harm her subjects, leaving only the victim's skull behind, covered in pink glitter. This can be prevented (somehow) by having a Fairy kiss someone, as if placing a protective charm on them to prevent the queen from killing them.

Fairies are physically weak but seemingly have significant Magical power. Depending on the type of insect a Fairy takes after they can make use of whatever body features they have, like Bee Fairies having stingers. Some Fairies emit an aura around their body that may signify an increase in Magic Power when compared to other Fairies though not enough has been revealed to confirm it. Otherwise they are known for the following:

Fairy Kiss: Fairies have the ability to mark people with a sort of invisible protection charm by kissing them on the nose. It prevents the Fairy Queen from killing them (at least not right away) as the Fairies show trust in whoever they kiss and possibly would not want them killed.

Fairy Language: Fairies are so far the second known race to have their own native language. It's possible for other Medians to understand it and Fairies in turn can learn Lingo. Unlike the Angel Language, which is represented by blue text in the comic while having a Rune lettering system, the Fairy Language has yet to be spoken aloud.

Flight: All Fairies, despite their continually unique appearances, have the ability to fly using the large wings on their backs.

Retrieved from "https://slightlydamned.fandom.com/wiki/Fairies?oldid=10143"
Community content is available under CC-BY-SA unless otherwise noted.