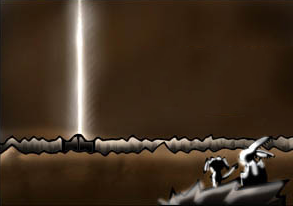 The Ascension is the process by which Demons leave Hell in order to travel to Medius. It involves the sacrifice of many Angels in order to function. It was first mentioned by Azurai.[1]

The exact process is still unknown, however Sahne, an unusually friendly Demoness in St. Curtis, made several vague references to this process and eventually explained that the process involves sacrificing living Angels in order to cause a large pillar of light to appear in a certain location in Hell. This allows Demons, as well as at least one Median escort (which is required to function), to leave Hell; this however will trigger a Counterreaction in Heaven which causes an equal amount of Angels and Medians to arrive on Medius as well.

Sahne has also mentioned that Demons were performing this ritual on Medius to cause more Ascensions to occur.[2] It's unclear if this ritual can work while within Hell itself as Counterreactions seem to happen while in Medius too, allowing Angels like Darius to enter directly into Hell.

The Ascension has been used by Hell's Army for quite some time as they are currently planning on abandoning Hell in order to take over Medius. The exact reasoning for this is unknown, but to date, many notable Demons (including Iratu and his team, Lazuli, Sahne and Lakritz) have used this to enter Medius, many likely while in possession of an Ascension Pass that verifies their right to leave. It was also used by Rhea and Buwaro who were being helped by Sakido before she perished during the escape.

Retrieved from "https://slightlydamned.fandom.com/wiki/Ascension?oldid=9030"
Community content is available under CC-BY-SA unless otherwise noted.